Stithians Village Hall Saturday January 29th 2011 10.30am – 3.30pm
Kick start your creative year with four inspiring films. Bring along some lunch and something to share.
Elemental – Ken Matsuzaki    Ken Matsuzaki is a Japanese potter, the favoured apprentice of Tatsuzo Shimaoka (the National Living Treasure). Working from Mashiko Matsuzaki he enjoys an international reputation.This film shows him throwing in his workshop and features unique footage of him firing his Anagama kiln, with the help of Phil Rogers who commentates on the process, and his exhibition in the UK.

Chihuly in the Hotshop – Dale Chihuly    Dale Chihuly’s passionate mission to explore and push beyond the boundaries of glassblowing has never been more captivating!
This film was premiered on the opening weekend at the 19th Annual Palm Springs International Film Festival

The Pottery Industry – 20th century to today    A selection of archive films from different periods from the 1920’s to today featuring individual pottery firms and processes including Twyfords, Spode and Moorcroft plus sagger making and craft pottery of the 1950s.

Kiln Formed Glass – Rudy Gritch    Rudi Gritsch, an Austrian kiln forming artist takes viewers through many of his processes involving the kiln. We follow him as he takes his work from the initial phases of design through the detailed setups, firings and finishing processes to completed works of art.
Members - £5    Non-members - £7.50
Booking Form
Posted by Mabena at 4:41 PM No comments: 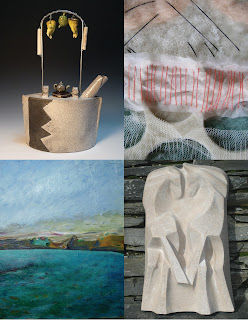 Members Carolyn Panter and Andy Titcomb will be exhibiting new work at The Rock Village Institute Rock, the exhibition runs from December 20th until January 2nd 2011
open 11.00am - 5pm each day except Christmas day.
Posted by Mabena at 11:26 AM No comments: