This is a final call for those that wanted to book a spaces at Truro Markets but haven't got round to it yet . We have 4 people signed up for August and 3 for September. We really need 8 stands to make either event viable and look a good presence on the Piazza ( and we will decide if it runs in the next few days). Please contact Carol Scott asap by email scotpot@btinternet.com if you want to book a space
Booking Details
OPEN AIR CERAMICS and GLASS MARKET
2 dates 19th August and 9th September
on LEMON QUAY, Truro.
We have booked a licence for the  group to trade on Lemon Quay piazza on the above dates. As last year each day will be in the style of a French provincial town ceramics/glass market, this will be a selling direct to the public day, hopefully fun and profitable. We shall be open to the elements.
Posted by Mabena at 8:20 AM No comments:

A career in ceramics video 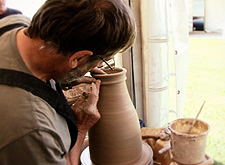 Member Nic Harrison describes the challenges he faced when starting out, and the stumbling blocks for the ceramicists of tomorrow. Watch the video 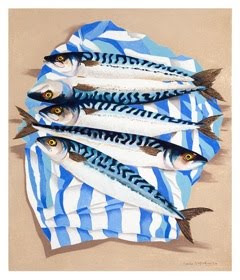 Saturday 26th June at Chacewater Village Hall.
Despite this being the hottest day of the year nearly 40 members with some guests attended this excellent talk on Islamic Tiles at Chacewater.
Venetia Porter is a curator of Islamic & Contempory Middle Eastern Art at the British Museum and is responsible for the collection of Islamic art, in particular the Arab world and Turkey as well as the collection of the modern and contemporary art of the Middle East.
Her talk concentrated on the tile production in Turkey and Syria between the 15th and 18th centuries these tiles being characterised by their brilliant range of colours and designs. Many of these tiles made in Persia and Syria show the dominating influence of the blue-and-white porcelains of Ming China featuring plant and animal forms. The range of tiles shown was extensive, from individual examples to larger panels and decoration of whole buildings, including the most spectacular examples of Iznik tiles to be seen in Istanbul, the most famously in the ‘Blue Mosque’.
Outstanding tiled buildings from the 14th & 15th centuries can be seen in Samarkand while the best examples from the 16th & 17th centuries are in Isfahan with Damascus the prominent tile-producing city during this period.
Closer to home, Venetia showed us the work of William De Morgan and his tiled ‘Arab Hall’ in Leighton House, London. Stimulating and informative, this event was very well attended and received by the CCGG and friends.
Posted by Mabena at 2:44 PM No comments: 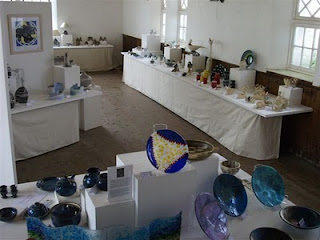 This years summer group exhibition runs until Saturday 10th July at St Peter's Church Hall, Port Isaac. Twenty ceramicists and glassmakers from the group have got together to transform the village hall and  exhibit their most recent work. This is the 3rd year that they have held their summer exhibition at Port Isaac. There is an exciting variety of work and styles  which ranges from large raku vessels from Penny McBreen, highly original teapots from Andy Titcomb, and delicate bowls from Frances Osborn, plus work from many more including Martin Jones, Heather Swain, Nicky May, Sue Gordon, Sirone Devadason, Jane Suchodolski, Linda Jewell, , Jane Marks, Jenni Phillips, Barbara Bell, Rowan Fawdon, Samme Charlesworth and Val Andrews, plus glass from Sarah Trewellha, David Stephens and Brenda Albert, . Danka Napiorkowska has been invited as a guest artist  to show her  pastels of flowers and fish  subjects which combine a vibrancy of colour with blended tones  and for which she is well known. 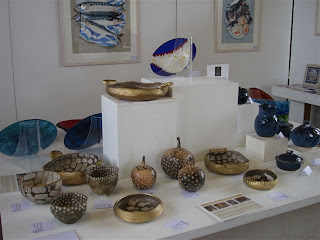 Posted by Mabena at 4:45 PM No comments: